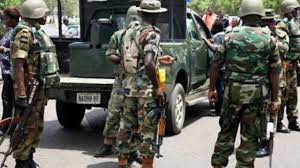 The Nigerian Army has alleged that the Eastern Security Network, an outfit of the proscribed Indigenous People of Biafra (IPOB), is behind the recent attacks in the south-east region.

Onyema Nwachukwu, Army spokesman, said this on Monday, November 1, while briefing journalists on the ongoing military operation in the south-east.

According to him, Chukwunonso Iherue, leader of a gang allegedly behind the attacks on police stations in Imo state, was behind the recent violence in Izombe community of the state.

He said Iherue was one of the convicts who escaped when gunmen attacked Imo prison in April.

In May and August, police stations in Orsu and Oguta LGAs were attacked by gunmen who also killed officers on duty.

Nwachukwu said Iherue and his gang members were seen parading the community, flying the Biafra insignia on October 1, while threatening and instilling fear in the people.

He said when the army attempted to arrest him, he escaped with the help of some persons “until he was later neutralised when he engaged the troops with fire from his pistol in a frantic attempt to escape”.

“The group opened fire on troops, killing two soldiers in the process,” he said.

“In an effort to avoid civilian casualty and collateral damage in the community, troops tactically withdrew from the area.

“Unfortunately, the suspected IPOB members ran amok, setting ablaze houses and other property belonging to those perceived to be against them.

“A reinforcement team was deployed to Izombe and the security situation was immediately stabilised, while peace has since returned to the community.

“It was, however, observed on arrival at the community that the criminal gang also burnt troops’ van in addition to other public and private property.”  the statement added