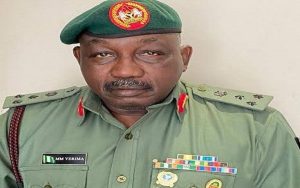 Brig. General Mohammed M. Yerima has been appointed as the new Director of Army Public Relation.

The Nation reported that Brig. Gen. Yerima will on Wednesday February 10, take over from Brig. General Sagir Musa who has been in the position in acting capacity since the exit of Brig. General Kukasheka Usmam.

The new Nigerian army spokesperson is said to be from Bade Local Government area of Yobe state.