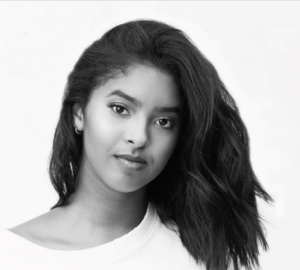 Natalia, who only turned 18 last month, is the eldest child of late basketball legend Kobe, who tragically died in a helicopter crash last year with daughter Gianna.

The international modelling agency on Monday night announced that Natalia had joined its roster.

Sharing a headshot of the teenager on Instagram, the company wrote: “NOW REPRESENTING: #NataliaBryant! ”

The caption also included a quote from Natalia, which explained how she’d always wanted to model.

“I have always been interested in fashion since a very young age. I have a love for the industry and ever since I can remember I wanted to model. There is a lot to learn but I feel this is a great opportunity for me to learn and express myself creatively.” 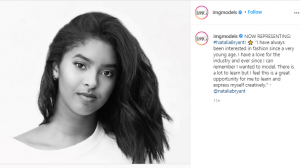 She also posted the announcement on her own Instagram page, adding: “I am beyond thrilled and so honored to be a part of the IMG family!” 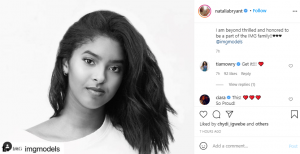 In a statement, IMG Models’ Senior Vice President Maja Chiesi said: “Natalia has such a bright future ahead of her, and we were taken aback by her beauty, talent and drive from our first encounter.

“We’re honored to partner with Natalia in shaping her career in fashion and beauty, and we look forward to connecting her with fresh, exciting opportunities that showcase her multifaceted personality and look.”

Proud mum Vanessa, 38, also shared the news on Instagram, writing: “I’m so happy for you! I love you Nani!” 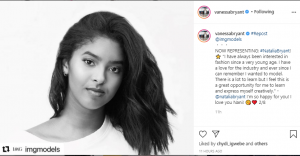 The basketball legend and daughter Gianna were among the nine that died in a helicopter crash, while on their way to the Mamba Academy in Thousand Oaks, California, for basketball practice at the time. Kobe was 41, while Gianna was just 13.

The seven other passengers who also lost their lives were basketball coach John Altobelli; his wife, Keri; and their daughter Alyssa; Payton Chester and her mother Sarah; Christina Mauser; and pilot Ara Zobayan.