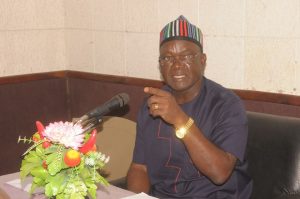 Governor Samuel Ortom has stated that his government will no longer grant amnesty to criminals unless they come back and beg for forgiveness.

The Benue state Governor said this on Saturday March 13 while speaking at the burial ceremony of Terkura, elder brother to former Governor of the state Gabriel Suswam, who was killed alongside his aide on March 2.

“There is no more amnesty, no more negotiation with them (criminals), except they come back like the prodigal son and plead for forgiveness.

“You can see in Anyiin alone, we have Ashi Polytechnic, Ashi international market, microfinance bank and a rice mill. These are the things that we are using to woo investors to come and do business in the state, because government does not have the resources to do it alone.

“The late Suswam saw it, but unfortunately, he met his death right here in Anyiin, struggling to work and add value to the economic development of the community.

“From intelligence reports, some members of the community are supporting these criminals, which makes it difficult for security men.

“I want to assure youths in the state, not only in Sankera, that we are going to go after these criminals and by the grace of God, we will get them.’’