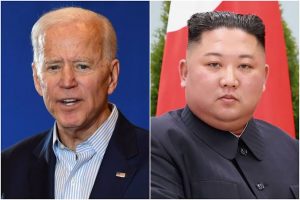 North Korean dictator, Kim Jong-Un has snubbed attempts by US President, Joe Biden to reach out and open up lines of dialogue over increasing nuclear threats posed by North Korea to its neighbors and the broader international community.”

Biden’s administration launched secret attempts last month to reach out to North Korea through multiple channels, according to a Saturday, March 13 report by Reuters but thus far Pyongyang has been unresponsive.

News of the outreach comes as lawmakers and key US allies are eagerly awaiting details about Biden’s North Korea policy, which they expect will be announced publicly in the coming weeks when the administration has completed a policy review.

It is believed that North Korea is now a nuclear capable country capable of launching nuclear attacks on it’s neighbors, Japan and South Korea but whether their nuclear bombs can reach the United States Mainland is still not confirmed by the US.

Reports say Biden attempted to reach out to Kim to reduce the risks of escalation between both countries.

It should also be noted that it’s been over a year since the North Korean government had any communication with the US, and that was when Donald Trump was in power.

“To date, we have not received any response from Pyongyang. This follows over a year without active dialogue with North Korea, despite multiple attempts by the US to engage.” An unnamed US official told CNN in response to the Reuters report.

According to the US official, the new United States’ policy towards North Korea will include ”evaluation of all available options to address the increasing threat posed by North Korea to its neighbors and the broader international community.”

During the new NK policy review process, the Biden administration has consulted with former government officials with experience in North Korea policy, including officials from the Trump administration.

“We look forward to completing our intensive, multi-stakeholder policy review in the coming weeks,” the official said.

Recently, US Satellite imagery showed North Korea has taken steps to conceal a facility that US intelligence agencies believe is being used to store nuclear weapons.