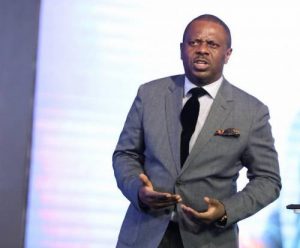 Senior pastor of Covenant Christian Centre, Poju Oyemade has alleged that political leaders control people by putting wedges between them.

Oyemade said this on Sunday May 17, while commenting on the recent calls for secession. The Pastor who stated that the country will not disintegrate, also claimed that some political leaders are using ethnicity to divide the country and calling for secession as a means to gain power and money.

He also stated that when these political leaders are sharing money, there is no tribe or religion.

“Let me just tell you, this country is not breaking. The reason is that before God does anything in a nation, He calls His people. Even if they have done wrong and He wants to judge them, if He finds intercessors, he will look away from the judgment and correct it without bringing judgment.

“Nigeria was not always like this. The freest and fairest democratic election to date in Nigeria was won by a Muslim presidential candidate and a Muslim vice presidential candidate, and they won Christian states. What suddenly happened to Nigeria? Some political leaders felt the best way to control people, to access money and power was to put wedges between people. So they began to play up the differences between people. It is a political strategy to control the people.

“But when they are sharing money, there is no tribe or religion; they are sharing it behind. So wake up. Don’t let anybody use your head to break anything because when the thing starts, they will be at Murtala Muhammed Airport and before you know it, they will be tweeting at you from London while you will be on the run.

“Don’t start following people who are saying, ‘We will destroy’ because you don’t know what people are cleaning out. This country was established as a business and people have been making money.”