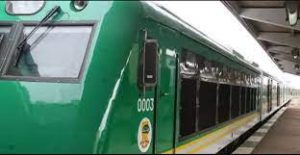 A train was forced to stop due to damage done on the Lagos-Ibadan railway tracks by vandals.

The train left the Obafemi Awolowo Train Station in Ibadan on Saturday morning but had to stop along the road because some vandals had allegedly removed some components on the railway track.

Passengers said they were stranded for a while and feared for their lives as they waited for the damage to be fixed.

An announcement was made by the NRC official on board, telling passengers that technicians were fixing a fault on the track.

Also, a train going from Lagos to Ibadan was forced to stop in the opposite direction.

Both trains continued their journey after the damaged section had been fixed.

Previous ArticleSinger Oxlade apologizes to lady in his viral S£x tape
Next Article APC to amend its constitution, to replace BoT with advisory council