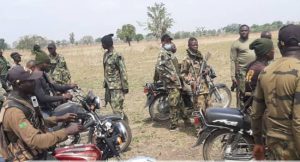 Troops of Operation Thunder Strike (OPTS) and One Division of the Nigerian Army have killed two bandits in Buruku general area of Chikun local government area of Kaduna state.

Kaduna State Commissioner for internal Security and Home Affairs, Samuel Aruwan said the troops engaged the bandits in a gun battle after which two of the criminals were neutralized while several bandit camps were also cleared and destroyed during the operation.