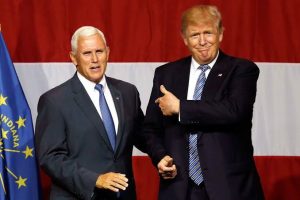 Former US Vice President, Mike Pence has spoken out against his former boss Donald Trump saying the former president was wrong to say he had the right to overturn the 2020 election as Trump demanded.

Pence made the statement in a speech to the Federalist Society in Lake Buena Vista, Florida, on Friday, February 4.

He directly took on Trump’s claim – last week Sunday that Pence had the right to ‘overturn’ the election.

‘But there are those in our party who believe that as the presiding officer of the Joint Session of Congress, that I possessed unilateral authority to reject Electoral College votes,’ Pence said, speaking of his own constitutional role overseeing the vote count on Jan. 6th, 2020.

After the letter, Trump tweeted that pence lacked ‘courage’ and should have acted.

Afterwards, a mob rampaged through the Capitol, with some chanting to ‘hang’ Pence for failing to refuse to send back electoral votes from states where Trump was claiming fraud.

‘And frankly, there is no idea more unAmerican than the notion that any one person could choose the American president. Under the Constitution, I have no right to change the outcome of our election.’

‘And Kamala Harris will have no right to overturn the election when we beat them in 2024,’ Pence said, to applause from the crowd.

‘Look, I understand the disappointment many feel about the last election. I was on the ballot,’ he quipped. ‘Whatever the future holds, I know we did our duty that day.’

His rebuke comes after Trump saud he might pardon Jan. 6th defendants.