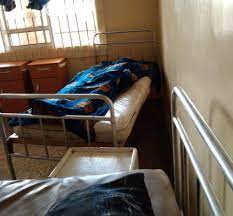 Two men have died mysteriously in the same hospital in Edo state after which coffins and other fetish items were discovered in their homes.

The incident happened in Ogbe community in Igarra and was relayed on Facebook by the founder of BraveHearts Initiative, Priscilla Usiobaifo.

She explained that a popular mechanic was chatting with his aunt when he suddenly started screaming something about “money” and a man named Alex who he called a “bad friend”.

He started vomiting and was rushed to the hospital where he continued to utter incoherent words.

Shortly after, another man named Alex – the same name the mechanic had called – was rushed to the same hospital by his wife after he started screaming and vomiting.

Both men – one a 25-year-old mechanic named Ebafor Abiye and the other a 36-year-old bike rider named Alex Benjamin – were showing the same symptoms while admitted to the same hospital and they later died minutes apart on Monday, October 4.

The wife of the bike rider returned home while her husband was in the hospital and found a small coffin hidden somewhere in their home. Other fetish items were also found and she raised alarm.

This led to the mechanic’s house being searched and fetish items were also reportedly found, causing members of the community to believe the men were into “ritualistic Yahoo” that backfired, leading to their death.

Read Priscilla’s narration of the incident below. 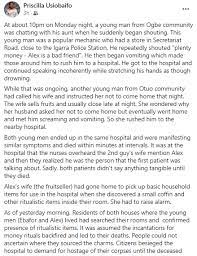