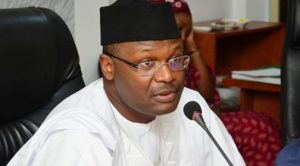 The Independent National Electoral Commission (INEC) has introduced its Voter Enrollment Device ahead of the 2023 general election.

The Voter Enrollment Device which was designed by INEC engineers and produced overseas, enables eligible Nigerians to register as voters online before completing the exercise physically at designated centres nationwide.

INEC Chairman Professor Mahmood Yakubu who noted that this will be the first time voter registration is handled partially online, said the commission is expecting a total of 20 million new registrations before the end of the CRV exercise.

“The expansion of voters’ access to polling units prepares the ground for the discharge of another important responsibility of the Commission. The registration of eligible Nigerians as voters is one of the immediate tasks before the Commission.

“Consequently, in the next one week i.e. Monday 28th June 2021, the Commission will resume the Continuous Voter Registration (CVR) nationwide. In doing so, the Commission is introducing a portal to enable eligible Nigerians to commence registration as voters online before completing the exercise physically at designated centres nationwide.

“This is first time a major exercise of this nature is handled partially online consistent with the Commission’s commitment to continue to deepen the use of technology in the electoral process in Nigeria. Just like the expansion of voter access to Polling Units, the Commission appeals to the media for support so that this novel idea will also be successful.

“The CVR will be a major issue for discussion at this meeting. The Commission will demonstrate the procedure for the proposed online registration and also present the new INEC Voter Enrollment Device (IVED) to you shortly.

“We intend to undertake the CVR exercise over a period of at least one year. The success of the exercise depends to a considerable extent on citizens’ awareness through voter education. There will be new registrants, requests for intra-State and inter-State transfers as well as the replacement of voters’ cards as provided by law. Furthermore, with the relocation of voting points to underserved areas as autonomous polling units, there is need for massive publicity so that citizens are familiar with their voting locations well ahead of all forthcoming elections. We appeal for your partnership to achieve this goal.

“The Commission will also brief you about the preparations for the forthcoming Anambra State Governorship election scheduled for 6th November 2021 and the Area Council elections in the Federal Capital Territory (FCT) holding on 12th February 2022. As you are already aware, the Commission has released the Timetable and Schedule of Activities for the two major off-season Governorship elections in Ekiti and Osun States holding on 18th June 2022 and 16th July 2022 respectively. We have since uploaded the details on our website and social media platforms. However, hard copies of the same documents are contained in your folders for this meeting.”