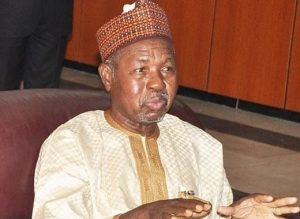 Governor Aminu Masari of Katsina state has said if all the Northwest governors stop the blame game and work in unity, the banditry in the region would be a thing of the past.

Governor Masari spoke in Abuja on Thursday December 16, when he led a delegation of the North-Western Governor’s Forum on a condolence visit to Aliyu Wamakko, senator representing Sokoto north.

About 23 travellers were burnt to death when a bus was attacked by bandits in Gidan Bawa village in Isa LGA of the state on Monday.

“We were in Sokoto state earlier to sympathise with the government and immediate families of those who were brutally killed in the name of banditry. The issue of banditry in north-western part of the country is not beyond us. We know the problem and the solutions are something that we as a people are capable of doing.

This is provided that all of us take responsibility and stop the blame game. Banditry, especially our own in the north-western part of the country can easily be dealt with if all hands are put on deck. This is because it has no religious colouration, no ethnic colouration, it is not ideological. It is simply pure criminality.”

“We need to know where the bandits are recruited, at what price are they recruited, all these are issues that are very well known to us” he said.