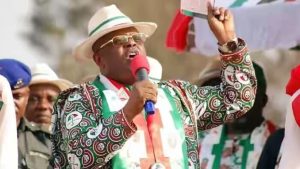 The All Progressives Congress (APC) says the court order sacking David Umahi and Eric Kelechi Igwe, as governor and deputy governor of Ebonyi state, is “reckless”.

A statement released by Salisu Na’inna Dambatta, APC director of publicity, says the presiding judge committed a “glaring judicial error” by ordering Umahi’s sack without relying on any provision of the constitution.

“The presiding judge committed a glaring judicial error by giving judgement sacking a duly elected and sworn-in governor and his deputy without relying on or citing any provision(s) of the constitution of the federal republic of Nigeria or any provision of the electoral act that empowers the court to sack a sitting governor and or his deputy,” the media director said.

This is purely a travesty of Justice.

It will be noted that a state high court sitting in Ebonyi state presided by Hon Justice Henry Njoku (who is more Senior in Bench than Hon Justice Inyang Ekwo of the Federal High Court 5 Abuja) has given judgement on the issues sought in this Ekwo judgement.

It is absolutely ridiculous and questionable, as it is shameful that a judge could decide a weighty matter such as conditions for sacking the governor of a state without relying on any express provision of the constitution or electoral act or judicial authority either of superior courts or even courts of coordinate jurisdiction.

The constitution of Nigeria upholds the supremacy of the right of association of persons (even to defect from one political party to the other).”the statement reads

The ruling party asked Ebonyi residents to disregard the verdict because it is “dead on arrival”.

Previous ArticleI was very surprised that Chief Momodu could do this – Sunday Igboho narrates how Dele Momodu visited him in Cotonu
Next Article Four policemen feared dead as Chief of Staff Ibrahim Gambari, Fashola and Ngige’s convoy crashes in Delta