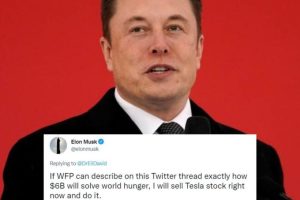 The world’s richest man, Elon Musk has promised to sell stocks of his company Tesla and contribute $6b to the United Nations if the body can prove that the money will end world hunger.

Last week, the director of the United Nation’s World Food Programme said if the world’s top billionaires just donated a fraction of their worth, millions of people who are at risk of starving to death can be saved.

David Beasley, director of the UN World Food Programme, said on CNN last week that a “one-time” donation from the top 400 billionaires, whose net worths are ever growing, in the U.S. could help save the lives of 42 million people this year.

“The world’s in trouble and you’re telling me you can’t give me .36% of your net worth increase to help the world in trouble, in times like this?” he said.

Musk, the founder of Tesla and SpaceX who has an estimated net worth of $151 billion, according to Forbes, has now replied to a tweet questioning the group’s figures.

“If WFP can describe on this Twitter thread exactly how $6B will solve world hunger, I will sell Tesla stock right now and do it,” Musk wrote

“But it must be open source accounting, so the public sees precisely how the money is spent.”

Beasley in response said the organization has systems in place for transparency and open source accounting.

I can assure you that we have the systems in place for transparency and open source accounting. Your team can review and work with us to be totally confident of such.

Beasley also responded to a question about the group’s existing spending, including $8.4 billion in 2020.

“We need $6B plus NOW on top of our existing funding requirements due to the perfect storm from the compounding impact of Covid, conflict and climate shocks.”

He also shared CBS News’ article, which explains how the current hunger crisis is a “toxic cocktail” of conflict, climate change, disasters, structural poverty and inequality. COVID-19 has only made it worse and on its website, the program says it needs $6 billion to avert worldwide famine this year.

“6B will not solve world hunger, but it WILL prevent geopolitical instability, mass migration and save 42 million people on the brink of starvation. An unprecedented crisis and a perfect storm due to Covid/conflict/climate crises,” Beasley said in another tweet.

He also tweeted that with Musk’s help the organization “can bring hope, build stability and change the future.”

“Let’s talk: It isn’t as complicated as Falcon Heavy, but too much at stake to not at least have a conversation. I can be on the next flight to you. Throw me out if you don’t like what you hear!” he wrote.

To which Musk replied: “Please publish your current & proposed spending in detail so people can see exactly where money goes. Sunlight is a wonderful thing.”