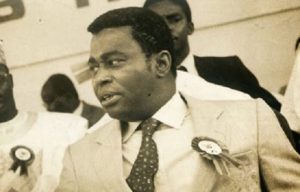 A former minister of Finance, Chu Okongwu is dead. He died at the age of 87 on Wednesday morning.

Okongwu, an Economist by profession, was born on September 23, 1934, in Nnewi local government area of Anambra State.

He studied Economic theory at Boston University. He completed the degree in 1961. He also attended Harvard University from 1961 to 1965.