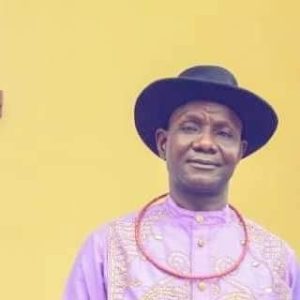 The termination of appointment was contained in a letter addressed to Mr Oghenesivbe on Thursday, December 30 and signed by the Secretary to State Government (SSG), Mr Patrick Ukah.

The letter read in part: “I write to convey to you the displeasure of His Excellency, the Governor of Delta State, over your conduct with respect to the performance of your duties wherein there has been manifest recklessness and insubordination.

“As this trend can no longer be tolerated, I regret to inform you that your service as Executive Assistant, Communication, is no more required and your appointment is hereby terminated

“Accordingly, I am to request that you take necessary steps to hand over all government properties in your possession to the Permanent Secretary, Directorate of Government House and Protocol forthwith. Thank you for your cooperation.” 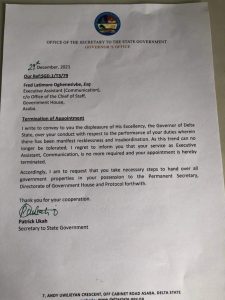 It was gathered that Mr Oghenesivbe had a week ago penned and published on the social and online media a scathing letter accusing some unnamed individuals, whom he described as ethnic bigots, of playing the ethnic card around the governor.

In the post, which he later pulled down, Oghenesivbe accused the alleged ethnic jingoists of not allowing Okowa to accede to some of his official needs and requests including an official car since his appointment.

Previous ArticleArmed robbers attack Ibadan Poly, shoot lecturer
Next Article Popular Buhari supporter who vowed not to leave the President dumps him after bandits abducted five of his brothers