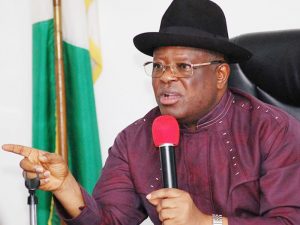 Governor David Umahi has placed a ban on drinking joints and night clubs among others to forestall the spread of the second wave of COVID-19 pandemic in Ebonyi state.

Special Assistant to the governor on Media and Publicity, Mr Francis Nweze said the Governor issued the ban at the flag-off of the second wave of COVID-19 protocol compliance campaign at the Exco Chambers of the old Government House in Abakaliki on Thursday December 21.

Umahi who directed complete enforcement of COVID-19 precautionary measures including not more than two hours of worship on Sundays, also announced plans to begin local production of oxygen in the State to cut the cost of fighting the COVID-19 pandemic.

The Governor appealed to residents of the state to embrace steam inhaling for detoxification and further expressed the determination of the government to scale up testing beyond 450 per local government area.