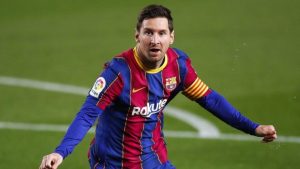 Superstar footballer, Lionel Messi has agreed to stay at Barcelona for two more years before joining David Beckham’s Inter Miami side in the US.

His future at the Catalan giants had been in doubt after his deal with the club expired last month’s end.

However, according to reports, a new deal is close, and will see him spend another two seasons at Barcelona before moving to America to star for Beckham’s club.

It is reported Messi will spend two seasons in Miami, before returning to Spain and becoming a strategic partner at Barcelona with an off-field role as part of the ten-year deal, such as a global ambassador.

The 33-year-old will take a significant pay cut in the new contract, but the wide-ranging nature of the deal appears enough to have convinced him to once again commit his future to Barcelona.

Messi hinted at quitting the club earlier this year when he revealed his wish to play elsewhere while still keeping his links to the club he made his debut for in 2003.

‘My plan is to give all I can for the club at the moment,’ Messi told Spanish TV station La Sexta.

‘I would like to play in the United States and experience life and the league there, but ultimately come back to Barcelona in some capacity.

‘I’m not thinking too far ahead in the short-term and just want to see how the season finishes.’