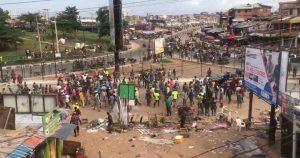 A yet-to-be-identified man was shot dead at the Water bus stop, along the University of Ibadan-Ojoo Road today June 21 shortly after he had made withdrawals from one of the Automated Teller Machines ATM in the area.

According to eyewitnesses, the man was about to leave the ATM point when he was attacked and shot by the assailants. The man, who was shot in his private parts, died at an undisclosed hospital in Ojoo.

The state police command is yet to react to the incident.