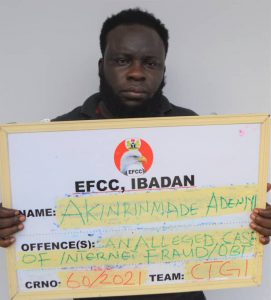 A young man has been sentenced to three months in prison for an offence bordering on impersonation.

He pleaded guilty to one count charge of fraudulent impersonation contrary to Section 22(2) (b) (i) of the Cybercrimes (Prohibition, Prevention, etc.) Act, brought against him by the Ibadan Zonal Office of the EFCC after his arrest in January.

The Court also ordered him to restitute his victim the sum of USD 500 (Five Hundred United States Dollars).

He’s also to forfeit his Toyota Lexus ES330, one Techno K7 phone, and one HP Laptop to the Federal Government of Nigeria through the EFCC, being part of the proceeds derived from his fraudulent act.

Previous ArticlePolice reunite 15 trafficked children with their parents in Niger state
Next Article When I speak about the religious issue in the army, I’m not referring to today’s army – Sheikh Gumi makes clarification