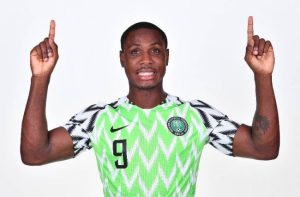 Odion Jude Ighalo has come out of retirement to represent the Super Eagles of Nigeria again.

Super Eagles manager Gernot Rohr named the Al-Shabab striker in his 24-man squad for the clash against Cape Verde and Liberia next month.

The ex-Watford striker first retired from international duty after Nigeria’s third-place finish at the 2019 Africa Cup of Nations, where he finished as the top scorer with five goals.

The Super Eagles will tackle the Lone Star of Liberia at the Grand Stade Tangier in Morocco on Saturday, 13th November and then fly into Lagos for the final group game against Cape Verde’s Blue Sharks at the Teslim Balogun Stadium on Tuesday, 16th November.