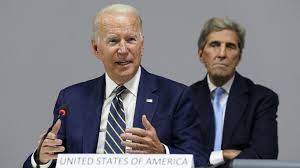 President Joe Biden has apologized to his fellow world leaders at the global climate summit COP26 on Monday Novermber1, for Donald Trump taking the United States out of the Paris Climate Accord.

Trump announced the U.S. was withdrawing from the accord in 2019, though the withdrawal didn’t take effect until November 2020. But after taking office in January, Biden quickly rejoined the Paris climate accord after Trump withdrew the U.S. from this agreement to reduce carbon emissions.

Biden at the United Nations Climate Change Conference in Scotland on Monday said he “shouldn’t apologize, but I do apologize” for the fact that the Trump administration pulled out of the Paris accord and “put us sort of behind the eight ball a little bit,” The Associated Press reports.

During his speech at the climate conference, also pledged to have America help other countries financially when it came to financing climate change, arguing nations who caused most of the environmental damage should pay more.

‘The United States has an obligation to also step up and finance other countries who have not had the opportunity to do as much damage as we have,’ he said.

‘Those of us who are responsible for much of the deforestation and all of the problems we have so far,’ Biden said, have ‘overwhelming obligations’ to the poorer nations that account for few of the emissions yet are paying a price as the planet has grown hotter.