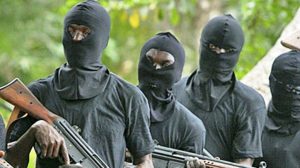 An operative of the Nigeria Security and Civil Defense Corps (NSCDC) and four civilians attached to the kitchen contractor working with the Conoil Plc located in Koluama 1 in Southern Ijaw Local Government area of Bayelsa state have been abducted by pirates.

The victims were abducted while on their way to Koluama 1 with supplies for the kitchen contractor on Wednesday December 1.

Daily Trust reported that the abducted NSCDC official has been identified simply as Kalifa and he is an indigene of Igarra in Edo State. It was also gathered that the sea pirates are demanding N25million for their release.

Locals who informed journalists that the abducted officials are working for Conoil along the creeks, hinted that the community youths are making efforts to secure the release of the abducted persons unharmed.

Spokesman of the NSCDC in Bayelsa State, Solomon Ogbere confirmed the incident. He said;

“It’s a confirmed story. One of our officers and four civilians were kidnapped last Wednesday while heading to their location where they protect ConOil facilities.

“They were all on mufti while returning to their base when they were attacked. Investigation is ongoing to track down the culprits.”

This is coming days after gunmen killed an NSCDC official and two oil workers, and reportedly abducted seven others at the creek of Nembe local government area of Bayelsa state.