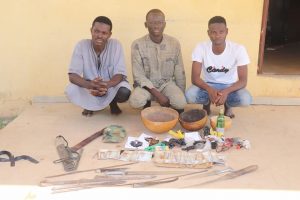 The Niger State Police Command has arrested three suspects for kidnapping two children, both aged 9, in Minna, the state capital.

Spokesperson of the command, DSP Wasiu Abiodun, who disclosed this in a statement on Friday, June 25, said the suspects, Danjuma Mohammed, 22, Mohammed Yasin,20, and Mohammed Usman,25, all of Barkin Saleh, Minna, were arrested by police operatives attached to Tudun-Wada Division on June 20.

“On 26/05/2021 at about 0935hrs, an incident of suspected kidnapping was reported at Tudun-Wada Division that a 9yrs old boy was suspected to have been abducted by unknown persons from a school premises along Shiroro road, Minna at about 0745hrs,” Wasiu stated.

“The parents were contacted to pay a ransom of N500,000 by an unknown caller, but the boy was later found around Lamgbeji area of Barkin-Saleh at about 1900hrs after he escaped from the abductor while the case was under investigation.

“Similarly, on 11/06/2021 at about 1700hrs another incident of kidnapping of a 9yrs old boy from David Mark road, Minna by unknown person(s) was also reported at the same division and the parents were equally contacted for a ransom of N45million. The parents were made to pay a sum of N300,000 as agreed ransom through an account number sent to them before the victim was released on 13/06/2021,” the statement read.

During the painstaking investigation, the Police operatives swung into action and arrested Danjuma Mohammed at Barkin-Saleh who also led the Police to the principal suspects; Mohammed Yasin and Mohammed Usman.

“Mohammed Yasin, during interrogation confessed to the crime and narrated that he perpetrated the act with Mohammed Usman and one Almajiri who is presently at large. The Almajiri was used to open a bank account with fake details where the ransom was paid and Danjuma acted as informant.”

DSP Wasiu added that effort to arrest the other accomplice is ongoing.

Others are two cutlass covers, one axe, one saw, a sword, four knives, one iron rod, three calabash and assorted charms.