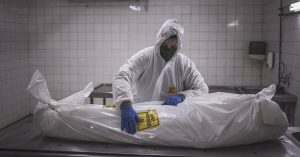 Together, the United States, the European Union, Britain and Brazil – all upper-middle- or high-income countries – account for one-eighth of the world’s population but nearly half of all reported deaths.

The U.S. alone has recorded over 740,000 lives lost, more than any other nation.

“This is a defining moment in our lifetime,” said Dr. Albert Ko, an infectious disease specialist at the Yale School of Public Health.

“What do we have to do to protect ourselves so we don’t get to another 5 million?”

U.N. Secretary General Antonio Guterres called it a “devastating milestone” and a “clear warning” that “we cannot let our guard down.”

The death toll, as revealed by Johns Hopkins University, is about equal to the populations of Los Angeles and San Francisco combined. It rivals the number of people killed in battles among nations since 1950, according to estimates from the Peace Research Institute Oslo.

As at press time, globally, COVID-19 is now the third leading cause of death, after heart disease and stroke.

In Ukraine, only 17% of the adult population is fully vaccinated; in Armenia, only 7%.

“What’s uniquely different about this pandemic is it hit hardest the high-resource countries,” said Dr. Wafaa El-Sadr, director of ICAP, a global health center at Columbia University. “That’s the irony of COVID-19.”

Wealthier nations with longer life expectancies have larger proportions of older people, cancer survivors and nursing home residents, all of whom are especially vulnerable to COVID-19, El-Sadr noted.

India, despite its terrifying delta surge that peaked in early May, now has a much lower reported daily death rate than wealthier Russia, the U.S. or Britain, though there is uncertainty around its figures.

Wealth has played a role in the global vaccination drive, with rich countries accused of locking up covid-19 supplies. The U.S. and others are already dispensing booster shots at a time when millions across Africa haven’t received a single dose.

The U.N. Sec. general Antonio Guterrez said, “We are failing much of the world. While wealthy countries are rolling-out third doses of the COVID-19 vaccine, only about five per cent of people in Africa are fully vaccinated. This is a global shame.”