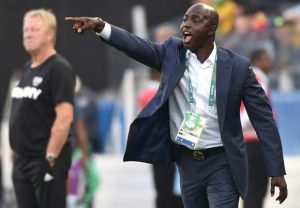 Former Super Eagles coach, Samson Siasia’s life ban from football has been reduced to five years by Court of Arbitration for Sport (CAS).

CAS had alleged that a match-fixer tried to involve Siasia as a coach of a club under his (fixer’s) strict directives in 2010. It was alleged that he was promised employment benefits if he fielded some players under the control of the match-fixer.

According to CAS, negotiations between the match-fixer and Siasia about the terms of employment were carried out by email for two months, but negotiation collapsed after the unnamed club failed to accept the former Flying Eagles gaffer’s requests.

53-year-old Siasia who was handed a life ban for accepting to “receive bribes in relation to the manipulation of matches”, had however denied the allegation and also appealed the sanction.

CAS which announced on Monday June 21 that it has reduced the life ban to 5 years, added that it overturned a fine of $5000 imposed on the former Nigerian striker by FIFA and also backdated the life ban to begin from 16 August 2019.

“We determined the imposition of a life ban to be disproportionate for a first offence which was committed passively and which had not had an adverse or immediate effect on football stakeholders, and that a five-year ban would still achieve the envisaged aim of punishing the infringement committed by Mr Siasia.

“(Cas) acknowledged the need for sanctions to be sufficiently high enough to eradicate bribery and especially match-fixing in football.

“However, the Panel considered in the particular circumstances of this matter that it would be inappropriate and excessive to impose a financial sanction in addition to the five-year ban, since the ban sanction already incorporated a financial punishment in eliminating football as a source of revenue for Mr Siasia.

“And considering that Mr Siasia had not obtained any gain or pecuniary benefit from his unethical behaviour.”