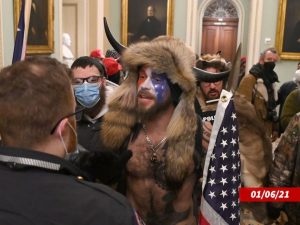 A bare-chested “shaman” wearing horns and face paint who became one of the most infamous faces of the US Capitol insurrection, has pleaded guilty to felony.

The Arizona man identified as Jacob Anthony Chansley was caught on camera shirtless, carrying a spear and sporting a horned fur hat during the violence. It became one of the images synonymous with the infamous day and he also became known as the “QAnon Shaman”.

He pleaded guilty on Friday September 3, to obstructing a US congressional meeting and also admitted to “disorderly and disruptive conduct” when he obstructed congressional proceedings and threatened officials.

Chansley who has been a subscriber to QAnon, the far-right conspiracy theory blamed for fueling the unrest, had told the court he had “mental vulnerabilities,” although psychiatric professionals had certified Chansley was competent to stand trial before the case.

Defence lawyer of the insurrectionist who has already been in prison for 8 months before the plea, said on Friday September 3 that Chansley was disappointed that Trump did not pardon him. 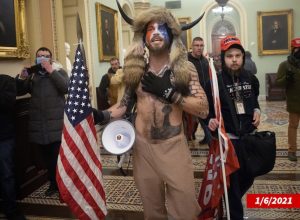 His lawyer Albert Watkins said the solitary confinement that Chansley faced for most of his time in jail has had an adverse effect on his mental health and that his time in Colorado helped him regain his sharpness.

Watkins who asked the court to be lenient as “Mr Chansley has zero criminal history”, also said Chansley expressed regret at what he had done and apologized to anyone he had scared throughout the unrest.  He also said his client has since repudiated the QAnon movement and asked that there be no more references to his past affiliations with the movement.

Chansley’s sentencing was scheduled for November 17 and he could face 41 to 51 months in prison, according to guidelines estimated by the prosecution.

Watkins had also reportedly asked for his client to be released from detention pending sentencing, a request US District Judge Royce Lamberth said will be considered.

Nearly 600 people have been arrested over the attack on the Capitol where Congress was meeting to certify Joe Biden’s November victory over Trump. Earlier, Trump had given a fiery speech falsely claiming his defeat was the result of fraud. Fifty others have pleaded guilty, mostly to misdemeanour charges of demonstrating in the Capitol.