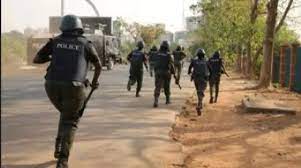 A middle-aged woman has been nabbed while attempting to kidnap a five-year-old schoolboy in Kano.

The minor has been identified as Bashir Jamilu, a nursery 2 pupil of Ulumuddin Primary School, Koki.

Mother of the child, Aisha Salisu Koki told Daily Trust that she sent him to school around 8:30am on Tuesday February 1. On his way, he met the woman, who held him by his hands, saying she was going to buy meat, noodles and milk for him, but the boy started crying.

“Along ‘lungun barebari’, he fell on the ground and she dragged him. Just beside the school he asked to be left to go in but she refused saying that she will bring him back. That was when people began to understand what was happening.

“When she was queried, she said he’s her son and people started beating her because they knew the child wasn’t hers.

“The moment I arrived at the place, I met her dragging the child with other people saying he’s her child. They then showed her to me as his mother.

“Upon seeing me, she (the suspect) started hitting me asking me if I was the one who gave birth to him. My son was still crying while repeatedly calling me ‘Umma ta’ (my mummy).

The boy’s mother further revealed that the suspect was sent to the state’s CID from where they were further directed to the state’s anti-kidnapping unit.

“I really commend the effort of the Vigilante people here because they were the ones who saw her with the child and swiftly unmask the demon in her.”

Nasiru Ayuba Yusuf, the commander of Koki Vigilante group, who saw the woman dragging the child said at first, he thought she was his mother taking him to school because the child was wearing uniform.

“I told our people to watch it notwithstanding. Not too long, they called me back to inform me that she’s a kidnapper.”

This is coming after Abdulmalik Tanko, a school proprietor confessed killing five-year-old Hanifa Abubakar, weeks after abducting her.