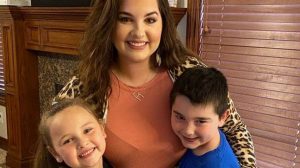 An Oklahoma woman was killed by an apparent dog attack as she was taking care of a dog residence.

Rebecca McCurdy, 28, was found dead by officials inside a garage near Skiatook, Oklahoma on Saturday, June 19, the Pawhuska Journal-Capital reported.

McCurdy had reportedly been caring for the dogs that lived at the residence while house sitting for a friend.

Acccording to the Osage County Sheriff’s Office, evidence “indicates Rebecca was the victim of a dog attack.”

Authorities have now removed dogs that were potentially aggressive from the residence.

“The homeowner claimed he raised pit bull dogs for hobby/sale,” reads an announcement from the Sheriff’s Office.

“There were several pit bull dogs caged in the garage. One of the dog cages was toppled over and there were many signs of a dog attack visible.”

McCurdy is survived by a husband and two young children