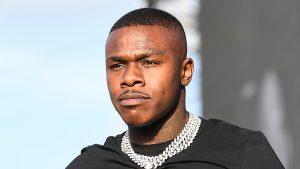 A battery case against American rapper, DaBaby has been dismissed.

The 29-year-old rapper had been accused of attacking a driver in Las Vegas in November 2020, but the misdemeanour battery charge has now been dismissed with prejudice, meaning the case against him cannot be refiled.

Clark County District Attorney’s Office told TMZ the charges were dismissed because DaBaby satisfied everything prosecutors asked him to do in order to resolve the case, including paying the alleged victim $7,500 and staying out of trouble.

The ‘Rockstar’ hitmaker’s lawyers had previously branded the allegations – which emerged months after the incident was claimed to have occurred – “an attempted money grab”.

“A 100% false accusation which suspiciously pops up in February regarding an alleged incident in November. We can smell another attempted money grab.”