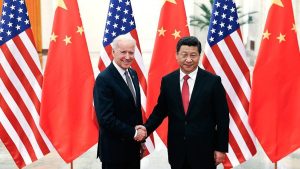 The Biden administration is expected to announce a diplomatic boycott of the 2022 Winter Olympics in Beijing this week, a senior administration official said late Sunday, November 5.

Under the proposed boycott, U.S. government officials will not attend the Winter Olympics in February, but American athletes would still participate and compete, CNN reported on Sunday.

President Joe Biden said last month that he was considering such a diplomatic boycott to protest China’s human rights record, including what Washington says is genocide against ethnic minority Uighur Muslims.

The Biden administration has been under pressure from lawmakers to institute the diplomatic boycott. They have wanted to take a stand against China’s human rights abuses.

President Joe Biden said last month that the administration was considering the move.

China has been criticized for cracking down on pro-democracy protests in Hong Kong, for its policies toward Tibet and Taiwan, and for detaining and abusing Muslim Uyghurs in Xinjiang.

The State Department, along with some European countries, has classified China’s actions against Uyghurs as “genocide.”

Chinese government officials have warned of a “robust Chinese response” should the U.S. or other countries launch boycotts.

Congressional Republicans have been especially vocal in demanding a full boycott, with Senator Tom Cotton of Arkansas saying last month: ‘Joe Biden should announce a complete boycott of the 2022 Olympic Games immediately.’