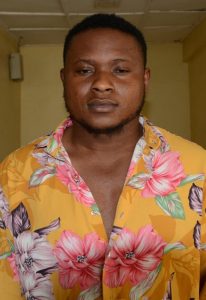 Collins Samuel, a Nigerian man who fraudulently obtained $8,000 COVID-19 benefit from the U.S. State of Virginia has been arrested and remanded in EFCC custody.

The suspect who was arraigned before Justice P. Mallong of the Federal High Court in Kaduna, pleaded  ‘not guilty’ to the one count charge that borders on impersonation and obtaining by false pretences.

Collins was reportedly arrested in Jos, Plateau State where he fraudulently represented himself as Ashley Cooper, an American citizen affected by COVID–19.

It was alleged that he obtained $8,000 in Pandemic Unemployment Assistance (PUA) from Virginia, United States and reportedly redeemed the $8,000 benefit through bitcoin wallet addresses he got from various cryptocurrency traders.

Justice Mallong adjourned the case till March 22, for determination of bail application and trial.