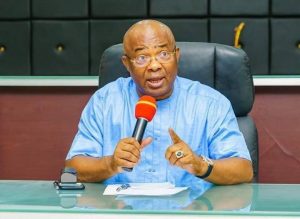 Governor Hope Uzodinma of Imo State, on Friday June 4, sacked all Special Advisers (SAs) and Senior Special Assistant (SSAs) in his cabinet amid worsening insecurity in the state.

The state Commissioner for information and Strategy, Declan Emelumba, who confirmed the sacking, disclosed this to journalists in Owerri on Friday.

Emelumba said that a board constituted by the governor had advised him to take the decision after they decided that it was in the overall interest of the people of the state.

The Commissioner said, “Yes, the story is true. The governor took the decision following a recommendation by a board he constituted in this regard. The idea is to make governance effective and is in the best interest of the people of the state. There is no ill-motive about it.”

This comes two weeks after Uzodinma sacked 20 out of his 28 Commissioners.