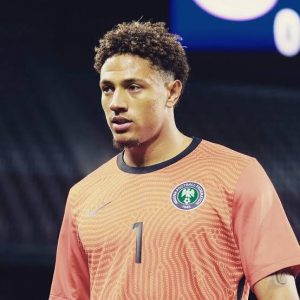 Super Eagles first choice Goalkeeper, Maduka Okoye has stated his belief that the players are ready for the 2021 Africa Cup of Nations even though thet losy to Cameroon last Friday, June 4.

Despite the loss, Sparta Rotterdam star Maduka says the team is prepared for the next African footbalk tournament.

He also expressed the Eagles’ readiness to square up against Cameroon for the second leg this week.

“We have taken some positives from the first match against Cameroon,” Okoye was quoted by NFF media.

“We had a good game and it was unfortunate that they scored with just that one shot on target.

“However, we have shown that we are ready for the Afcon with the strength of character we showed after conceding the goal. We are ready to go for it on Tuesday.”

“We are not happy to have created so many chances and fail to score,” the Kano Pillars forward said.

“We will approach the game differently on Tuesday. Cameroon is a big rival and we are not happy to have lost the game on Friday.”

Nigeria will play Mexico at Los Angeles Memorial Coliseum on July 3 before taking on Cape Verde and Liberia in September’s 2022 World Cup qualifiers.