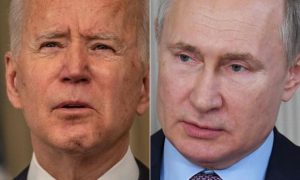 Russia’s President, Vladmir Putin has reacted to US President Joe Biden calling him a killer and saying that he would “pay a price” for 2020 US election interference.

When asked about Biden’s comments during a video call on Thursday March 18,  that was aired on Russian state TV, Putin said he wished his counterpart in Washington good health and was saying that “without irony”, but charged that the comments reflected America’s own troubled past.

The Russian leader who praised the American people, said the legacy of slavery and the country’s treatment of Native Americans weighed heavily on its dealings abroad. He added that for Biden to call him a killer, it takes one to know one.

“In the history of every people, every state, there are a lot of hard, dramatic and bloody events. But when we evaluate other people or even other governments, we always look as if into the mirror. We always see ourselves in it.

“I remember when I was young and I got into fights with my friends, we always used to say ‘whoever calls names is called that himself.

“It takes one to know one.

“And that’s not just a children’s joke. The meaning is quite deep psychologically. We always see our own qualities in another person and think that he/she is like ourselves. And coming from that, evaluate his/her actions and evaluate him/her overall.

Konstantin Kosachev, Deputy Chairman of the Russian parliament’s upper house, had also said that Moscow would likely take further steps “if the American side does not offer an explanation or apology”.

Kosachev said Biden’s comments “were not acceptable under any circumstances” and sent any hopes of an improvement of relations under the new administration “down the drain”.

Russia also recalled its ambassador to the United States on Wednesday for “consultations” just hours after Biden’s remarks, which the Kremlin later said were “very bad” and without precedent.