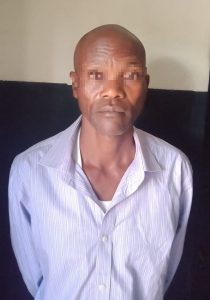 A 50-year-old man who defiled his 6-year-old daughter a week ago in Megogo Village, Marani, Kisii county, Kenya, has been arrested.

The suspect, Julius Ogamba Ongera, was arrested on Sunday, April 11, by detectives with the Directorate of Criminal Investigation, DCI.

In an incident that outraged many Kenyans after photos of the minor’s blood-soaked clothes were shared on social media, Ongera is alleged to have lured his daughter into a thicket in a plantation where he committed the beastly act on Saturday, April 3.

The man left the child who was bleeding, unconscious in the plantation. She was said to have regained consciousness hours later and managed to walk with difficulties to her home and reported the matter to the mother.

Ongera went ahead to threaten his wife with dire consequences, if she dared to report the matter to Police.

However, after the minor’s condition worsened, she was rushed to Marani Sub-County hospital by her mother, where inquisitive nurses found out that she had been defiled and immediately alerted DCI officers.

“The suspect immediately went into hiding after detectives launched his manhunt but his antics wouldn’t last for long. This afternoon, he was arrested by detectives from the Crime Research and Intelligence Bureau & their Kisii counterparts, at his hideout in Kongasis, Kiambogo in Nakuru County. He will be arraigned in court tomorrow, to answer to his crimes.” DCI said in a statement.

“DCI remains indebted to members of the public who have continued to partner with us in pursuit of justice for victims of crime.

The victim’s mother said she got married to the suspected perpetrator in 2014 when she already had two children and was able to give birth to two more children; a boy and girl;

In her statement to the police, the woman said she sent the girl to fetch water from a nearby stream, only to return home bleeding heavily.

“It rained heavily immediately after she left home. I thought she had taken shelter and could be back soon. Finally, when she came home, I noticed some bloodstains on her dress. I tried to inquire but the father insisted that the blood was as a result of an injury she had sustained early in the day,” she added.

She said her 50-year-old husband started threatening her not to reveal what had happened.

“That is when it hit me that my daughter had been defiled. I rushed her to Marani Sub County hospital for treatment.” she added.

The woman said her first two children she had given birth to in her first marriage have been the source of conflict with her current husband and some in-laws.

“We have been quarreling. I have not had peace in my marriage. I have not been able to reach him since Saturday.”

The incident has generated an outcry with leaders calling on the police to arrest the perpetrator.

In a press release last Tuesday, Public Service and Gender Chief Administrative Secretary Linah Jebii Kilimo said she had taken up the matter personally and gotten into contact with the National Government Administration officials and security officers in Kisii County over the matter.

“Girls and women cannot exploit their full potential if they fear for their safety and that it is no longer time to just empathise with victims but implement the law to the letter to ensure that justice is served to all who have suffered.” she stated.

Previous ArticleGod is not happy with Buhari, political and religious leaders – Jehovah Sharp Sharp pastor carries coffin on his head to protest against bad governance
Next Article BAFTA Awards 2021: See the full list of winners