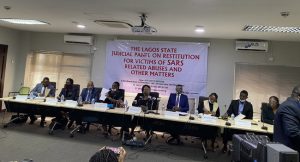 The Lagos State Judicial Panel of Enquiry and Restitution for Victims of SARS related abuses and other matters has approved the returned control of the Lekki Toll Gate plaza to its owners, the Lekki Concession Company (LCC).

The panel suspended operations of the toll plaza after the gunshot incident on October 20, 2020. Military men stormed the plaza on Tuesday, October 20, and fired gunshots while EndSARS protesters gathered at the toll plaza for their protest.

LCC had in December 2020, appealed to the panel to allow it to take over the plaza for repair and insurance claims. This was declined by the panel since investigations into the unfortunate incident that led to the closure was still being investigated.

At the resumed hearing of the panel today February 6, the chairman, Justice Doris Okwuobi, granted the request of LCC and handed the toll plaza to them.

Previous ArticleAs far as the PDP is concerned, the presidency should return to the North in 2023 – Former Minister of Police Affairs and PDP BoT member, Adamu Maina Waziri
Next Article Polygamy is responsible for the falling standard of education in the country – Emir of Anka