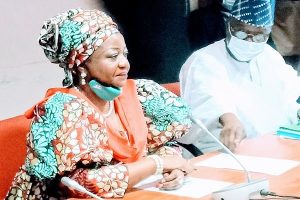 Shortly after her nomination, some Nigerians including Civil society groups and the PDP came out to oppose her nomination. According to them, she would not be able to discharge her duties in fairness as she is a member of the ruling party APC.

Onochie was screened by members of the Senate Committee on INEC today. During her screening, Onochie said she parted ways with the APC and stopped her volunteer work with the Buhari Support Organization (BSO) since 2019.

“I have learned over the years to stand with the constitution and due process but not on partisanship or sentiments. Since 2019, I have not had anything to do with any political organisation, including Buhari support groups.

When APC was doing re-validation of party members, I did not take part in that exercise. As I’m sitting down here, I’m not a member of any political party in this country. I’ve no partisanship in my blood.”she told the lawmakers

At the screening, Onochiw denied her membership of the ruling APC three times  and told the Committee that she stopped being a card-carrying member of APC in 2019 as soon as Buhari was re-elected for a second term in office. However, a suggestion by Senator Opeyemi Bamidele that Onochie be put on oath after she denied her membership of the APC, was supported by Senator Lawal Gumau (Bauchi South).

The suggestion was however opposed by Senator Ekeremadu and Senator Dickson,who argued Senate Rules do not support any nominee being placed on oath during screening. The Chairman of the Committee, Senator Kabiru Gaya, overruled the suggestion so as not to breach the provisions of the Senate Standings Orders on screening of nominees.

Gaya said the panel’s report would be submitted to the Senate at plenary next week for consideration and possible approval after he adjourned sitting.