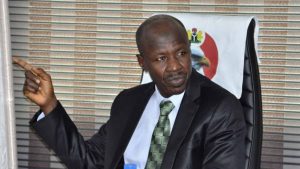 In a statement made available to newsmen by the commission’s spokesman Ikechukwu Ani, it was stated that the PSC is awaiting clearance from the office of the Attorney-General of the Federation and Minister of Justice and the Office of the Inspector General of Police.

This is coming days after opposition party, Peoples Democratic Party slammed President Muhammadu over plans to promote the embattled former boss of the anti-graft agency.