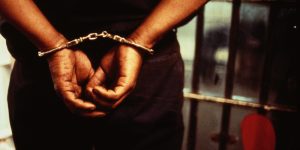 A 27-year-old farmer, Isreal Ikumuyi, was arraigned before a Magistrate Court in Oke Eda, Akure, on Friday, March 12, for raping a 10-year-old girl to death.

The incident happened on February 2, 2021, at Akinfosile village near Igbotako community in Okitipupa Local Government  Area of Ondo state.

It was gathered that the primary school girl identified as Esther Friday, was lured into the room by the suspect who promised to give the little girl some amount of money.

Ikumuyi claimed that he never intended to kill the girl, saying that he suffocated her to death while covering her mouth with a cloth to muffle her cries for help.

Narrating how the girl died in his room, Ikumuyi explained that he was in the kitchen when the deceased asked him for money.

“She came to meet me in my kitchen asking me for money, but I told her the money I have is to cook soup. After some time, she came back to meet me but this time she followed me from the kitchen for the bedroom still begging me for money. l later gave her N100 and slept with her in the room,” he explained.

He stated that as she laid beside him on the bed, he developed amorous feeling for her since he has no girlfriend.

“Initially I didn’t mean to rape her, but when she slept with me on the bed. I felt aroused and decided to quickly have sexual intercourse with her. I did not force her to have sex with me. We were together on the bed, but I have trouble penetrating her despite all my efforts and I had to cover her mouth with a cloth so that she could not raise alarm,”

“She was crying, but nobody could hear or come for her help as I have covered her mouth with cloth and she suffocated to death in the process. She died when I was having sex with her.”

He said he became afraid after he noticed that the girl has died and decided to lock her in the room while her parents were looking for the young girl but said the neighbours found the dead body of the girl on his bed.

The suspect was beaten and almost lynched by neighbors of the deceased parents but for timely intervention of people who handed him over to the police.

The Prosecutor, Inspector Uloh Goodluck, while presenting the facts of the case before the court said that the accused person killed Esther, by raping her to death.

He said that the offence committed by the accused person contravened sections 316, 319(1) of the Criminal Code Cap 37, Vol. 1 Laws of the Ondo State of Nigeria 2006.

Goodluck prayed the court to remand the accused person in prison custody pending the outcome of the legal advice from the Department of Public Prosecution.

He said that Ikumuyi lured the victim into his room with the promise of giving her N100 and had his way with her while the community people looked for her.

The plea of the accused person was not taken as he was not represented by any lawyer in the court.

The Presiding Judge, Magistrate N. T. Aladejana subsequently remanded the accused person in Owo Correctional Centre pending the outcome of DPP advice while the case was adjourned till May 3, 2021, for mention.