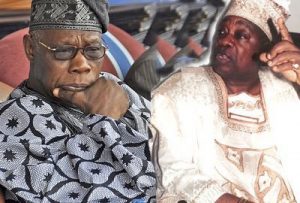 Former President Olusegun Obasanjo has said that the June 12, 1993, Presidential election believed to have been won by late business mogul, Moshood Kashimawo Abiola was annulled because of “bad belle”.

Speaking in Abeokuta, the Ogun state capital during his investiture as a Trustee of the Abeokuta Club on Sunday April 11, the former President said the annulment robbed Egbaland the rare opportunity to have three of its prominent sons occupy the seat of the president at different times.

“Normally when you win a cup three times, you keep that cup. Isn’t it? If not for bad belle, Abeokuta would have produced President of Nigeria three times, in which case we should have kept it permanently.

“But be that as it may, we have a great heritage and we should be proud of our heritage.”