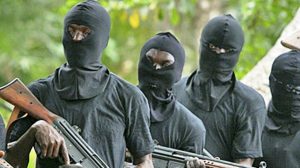 A police Inspector was killed on Thursday August 5 as gunmen attacked and burnt down Orlu police station.

Three of the gunmen were also killed in a gunfight which ensued. Imo police spokesperson, Mike Abattam said the gunmen at about 9:35pm attacked and threw explosives and petrol bombs on top of the roof of Orlu Police station, damaging the roof and causing a fire in the station.

Some vehicles in the parking lot were affected by the fire and it was learnt that the command’s tactical teams on ground engaged and subdued the gunmen in a gun duel.

“Three of the bandits were neutralized and their guns, one pump action gun and two locally made double barrel pistols were recovered while others escaped into the bush with bullet wounds.

“Unfortunately, a police inspector lost his life in the attack.”