Inter Milan’s Romelu Lukaku has been named as the best overall MVP of Serie A after he helped Inter Milan win the league title for the first time in 11 years.

The Belgium international, 28, scored 30 goals across Serie A, the UEFA Champions League, and the Coppa Italia with 11 more assists as Antonio Conte’s men ended Juventus’ stranglehold on the domestic scene. 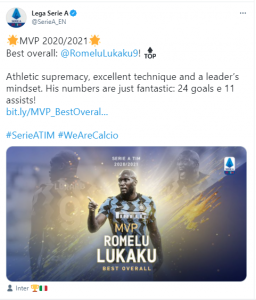