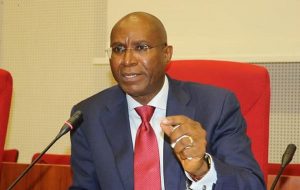 Deputy Senate President, Senator Ovie Omo-Agege has said that the senate is not against electronic transfer of election results which 52 All Progressives Congress senators voted against.

Answering questions from journalists after delivering a keynote address titled, “Nigeria’s Democratic Experience Since 1999: The Imperative of Reforming The Electoral Process” during the 16th convocation ceremony of Benson Idahosa University, Benin on Friday July 16, Omo-Agege said the nation cannot go for electronic transmission of election results with only 43 per cent internet coverage.

“The 9th Senate is fully in support of electronic voting and transmission of results.

“If we adopt electronic transmission for the 43 per cent, what happens to the rest 57 per cent?

“The country has to wait for the approval of the Nigerian Communications Commission(NCC) to adopt electronic transmission of the result.”

Omo-Agege who pointed out that the issue with Nigerian election is the “judicialization of electoral process” as he commented on electoral reforms, he added that electoral offences perpetrated by officials of the Electoral Management Bodies (EMBs) and officials of political parties, candidates and voters must be tackled to safeguard the sanctity of the electoral process of the nation.

He further explained that he is not questioning the role of the Courts since electoral justice and the adjudicatory process, is recognized as parts and parcel of the electoral process.

“The Courts rather than members of the political parties or the electorate as the case may be, determine winners of party primaries and elections even when the evidence runs to the contrary. This is eroding citizens’ confidence in the electoral process.

“However, the widespread perception that the judiciary lacks independence from the executive and that people pay for judicial outcomes that advance their personal and group interests raises a question mark about the legitimacy of some elected public officials.

Previous ArticlePolice arrest more suspects over SuperTV CEO, Usifo Ataga’s murder
Next Article Emma Ugolee extols the good qualities of late singer, Sound Sultan, to give an idea of the kind of man he was