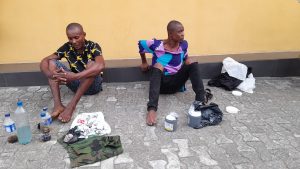 The suspects were arrested on Thursday and Friday, February 25, 26, at Nelson Mandela street in Calabar and Ekpenyong Ekpo in Akpabuyo local government area of the state.

The Officer Commanding 13 Brigade Provost Company, Maj. Stanley Ikpeme, handed over of the suspects to officials of NDLEA on behalf of the the 13 Brigade Commander, Brig.-Gen. Mohammed Abdullahi in Calabar on Saturday.

“These suspects were arrested by own troops at Nelson Mandela street in Calabar and Ekpenyong Ekpo in Akpabuyo local government area of Cross River for peddling in substances suspected to be drugs,” said Maj. Ikpeme.

“Consequently, I am directed to handover the suspects and the drugs to officials of the NDLEA for further investigations and possible prosecution. You are please requested to furnish this office with the outcome of the investigation to enable us update our records,” he added. 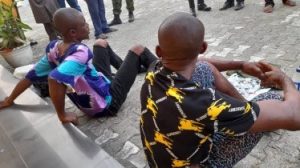 Previous ArticleInsecurity: When will Nigeria itself be abducted? – Lawyer Mike Ozekhome asks
Next Article One can’t post in peace these, jobless people read deeper meanings into every post – Olakunle Churchill