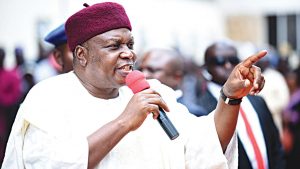 Governor Darius Ishaku has said that Nigeria is dangerously sliding into anarchy and becoming a failed state due to increased insecurity.

Ishaku who said this while being interviewed by journalists to mark his sixth year in office, said the increasing spate of insecurity across the country and the inability of the military and other security agencies to address the situation were indications of anarchy.

“The military should be in charge of flushing out insurgents. It is a disgrace if a country’s military cannot flush out insurgents within its territory.”

Ishaku also stressed the need for state police noting that state governors need to be empowered by the constitution in the proper handling of security in their states.

“We need a state police; we need the constitution to be amended.

“I am called Executive Governor, Executive for what? If I cannot implement the decisions I take with the troops under my command? So, the state police is imperative and must come to stay. Without the state police, we are surcharging democracy, it won’t work.

“The sooner the state police is enacted, the better.”

”On regional security outfit, the northeast is not contemplating it, I particularly do not support it, but I have since assumption of office been supporting the creation of state police.

”I have been the first person who said the constitution has been surcharged that is to say that, where we copied the constitution from the United States of America, it is written there that there is local police, state, and federal police and they complement each other.

”The issue is, we need state police, the constitution to be amended and I am not in support of regional security outfit, though it can work in other regions, for us here we have grown past that in the northeast, we are battling the insurgency.”