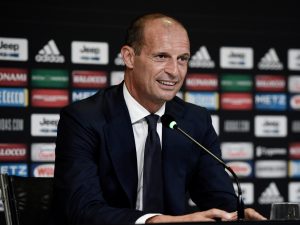 Juventus coach, Max Allegri has revealed he turned down the chance to manage Real Madrid in order to have a second spell in charge of Juventus.

Allegri was unveiled as Juventus manager for the second time on Tuesday, July 27, returning two years after he departed.

The club had hired Maurizio Sarri and Andrea Pirlo since Allegri’s departure but none have been able to perform well at the Allianz Stadium dugout.

Madrid wanted to sign Allegri when Zinedine Zidane departed at the end of last season, however, he now says he rejected the chance to move to Spain in order to try and get Juve back to the top of Serie A after they lost their league crown to Inter.

Allegri told his press conference on Tuesday: “I must thank Real Madrid president for the opportunity he gave me. I picked Juventus because of my love for this club and because I believe in this young team. It’s going to be amusing to coach these players, but we must win as well. It’s the most important thing.

“I feel thrilled. I’ve had all young players so far, good players who did well on Saturday in the first friendly match of the summer. The first-team players are coming back, they will all be available from Tuesday. Now it’s not time to talk about the past, we need to focus on the future.

“I thank the other clubs who had made an offer to me, but I woke up in the morning and called Andrea [Agnelli], asking him for a meeting. I am grateful he allowed me to return to coaching and win, which is what matters the most. I watched many games during my time off, especially at the end of the second year.

“I begin a new chapter at Juventus, this team is made of many young players who need to develop. There are also experienced players, such as Ronaldo, Chiellini and Bonucci. These three must be an added value for the club and the team, bringing experience and technique on the pitch, but they must also be role models for the young players.

“What we did will remain in history. Two years ago we decided to part ways, now we start from scratch to achieve our goals.

“I am proud that Juventus called me and I am proud of the fans’ love. From now, we just need to focus on the pitch.

“Juventus’ DNA is a particular one, every win comes from daily work. I found a team that won one title in the last two seasons and two more trophies last term. They did a good job, and I have a good team.”