Trending
HomeCrimeNigerian man arrested in India for illegal stay, cyber fraud after he went to file police complaint against aide who cheated him of money he duped from others
Share Facebook Twitter Google+ Pinterest LinkedIn Email 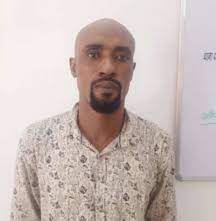 A Nigerian national who walked into a police station with a “cheating” complaint in Uttar Pradesh’s Bareilly, has been arrested after it was discovered that he had been staying in India without a valid visa since 2011.

According to the police, the Nigerian identified as Robert Otujeme, had allegedly transferred “duped money” into the bank accounts of four Bareilly residents and was in the city to meet them as they had “cheated” him. He was later arrested on Wednesday night, August 25.

Upon questioning the Nigerian, the cops realised that he was involved in an alleged cyber fraud worth Rs 80 lakh.

The man has been staying in Dwarka, Delhi, without a valid visa and passport and is now being interrogated by intelligence agencies, Bareilly SSP Rohit Singh Sajwan said on Thursday, August 26.

Additional SP (Rural) Rajkumar Agarwal told TOI that “Robert Otujeme, a resident of Lagos city in Nigeria had approached the cops at Faridpur police station on Wednesday to lodge a complaint against one Harpal,  a city resident, for cheating. We found that he was without a passport and he was restless. Suspecting foul play, cops started questioning him.”

“Upon investigation, we unearthed a larger racket. Harpal’s actual name is Mehandi Hasan and he had opened bank accounts on fake ID proofs. There were transactions of over Rs 80 lakh in the four accounts and the money was transferred from other accounts in the country.”the ASP said.

He added, “We are trying to verify if this racket is linked to any Hawala or drug peddling or if it is a case of cyber fraud. The bank transactions are being thoroughly scanned by experts.”

For years now, Otujeme was allegedly misusing the bank accounts of several individuals by “transferring the money duped from others and sharing 20% with the real account holder”.

He has been booked under sections of Passports Act, the Foreigners Act and the IT Act along with relevant IPC sections of forgery while Hasan and his son Arbaaz Khan have been booked for forgery. They are still at large. Two of Hasan’s aides are also under police scanner.