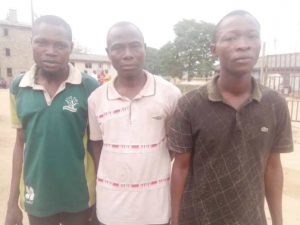 Three members of the Oodua Peoples  Congress (OPC) have been remanded in a correctional centre for alleged arson and murder while effecting the arrest of alleged Ibarapa kidnap kingpin, Iskilu Wakili.

The OPC members identified as Awodele Adedigba, 45;  Dauda Kazeem , 38, and Hassan Ramon, 33. were arraigned on three counts of conspiracy, murder and arson.

Prosecution counsel, Insp Opeyemi Olagunju told the court that the suspects on March 7,  at about 8am allegedly caused the death of a 45-year-old woman at Kajola village in Ayete community of Oyo state. They were also accused of setting the house on fire, causing a damage of N5 million.

Chief Magistrate, Mr Olaide Hamzat who did not take the plea of the suspects for want in jurisdiction, ordered that they be remanded in Abolongo Correctional facility, Oyo town.

Previous ArticleFloyd Mayweather to team up with Anthony Joshua and offer him advice before Tyson Fury megafight
Next Article FEC approves $1.5bn for rehabilitation of Port Harcourt Refinery