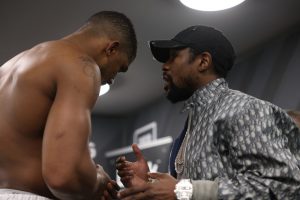 Floyd Mayweather has confirmed he intends to link up with Anthony Joshua and give him advice before his mammoth world title fight with Tyson Fury.

The British heavyweights will finally meet this year to decide who wins the four-belt undisputed heavyweight champion and Floyd Mayweather, who is undefeated as a professional boxer says he will be providing Anthony Joshua with advice before the fight. 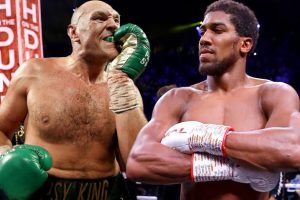 Mayweather was ringside in London for Joshua’s ninth-round stoppage of IBF mandatory challenger Kubrat Pulev back in December where he offered tactical advice during the fight. After the fight, Mayweather also visited Joshua privately at home

Mayweather says he will be teaming up with him now that the fight with Fury (an undefeated boxer) has been agreed.

“I look forward to working with Joshua real soon, we talk all the time,” he told the Disruptive Entrepreneur podcast.

“I met Tyson Fury on a few occasions; he’s great guy and very interesting. After the fight I like to see him sing… I haven’t seen him fight a lot of times.

“I’ve seen him fight twice, against Deontay Wilder, but it’s a very intriguing match-up. You can never say what’s going to happen in the sport of boxing. Both guys are great competitors.”

The fight between Joshua and Fury will see all four belts contested in a heavyweight bout for the first time in history.

In 1999, Lennox Lewis and Evander Holyfield both competed for three heavyweight belts.